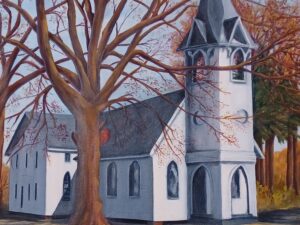 Mathews Chapel United Methodist Church is located in northern Mathews County, Virginia. The county is bordered by the Mobjack Bay, the Chesapeake Bay, and the Piankatank River. From the beginning this local church has been established on the traditional territory of the Powhatan people.

Mathews Chapel has a long history in this rural county. Before it was used as a Methodist Meeting House, the original building was a private chapel of Hesse Plantation and was one of the oldest churches of Kingston Parish. This chapel was mentioned in a patent granted October 30, 1686. It stood just south of the of Queen’s Creek on a rise of ground still known as Chapel Hill and overlooking the south fork of Queen’s Creek, once called the Chapel Branch.

The first sermon by a Methodist in Virginia was preached from the Court House steps in Norfolk in 1772. During the next two decades a number of circuits were formed throughout the Commonwealth. The first in this area being the Gloucester Circuit of which Mathews was a part. From the very beginning of the circuit, Mathews Chapel was one of its churches.

Sometime prior to 1797, the chapel was abandoned by Kingston Parish. At that time, it began to be used as a Methodist Meeting House.

In 1835, Mathews Chapel moved from its original site on Chapel Hill. A new church was built on land that was given by John Lumpkin. This property is the present location of Mathews Chapel.

Because the structure of the 1835 church needed extensive repairs, the church membership decided to build a new church in 1893. In 1902, the old church building was moved across the road and became the Chapel Lodge. This building is no longer there.

In 1923, a two-story structure was added to the back of the church to provide eight Sunday School classrooms. Also, that year the charge was divided, and Mathews Chapel became part of the North Mathews Charge. The churches in this charge included Mathews Chapel, Locust Grove, and Shiloh.

On January 5, 1953, the members of Mathews Chapel suffered the loss of the 1893 building by fire. the congregation rallied to rebuild. Ground was broken on July 2, 1953. On the second Sunday in October 1954, the opening services were held in the new church.